This is a 1796 copy of the 1746 letter of protection issued by authorities at the Bishopric of Bamberg giving Sussmann Wolf Brüll various permissions and legal protection in exchange for taxes and compliance of residency. This document is held in the Brull archive in Johannesburg. 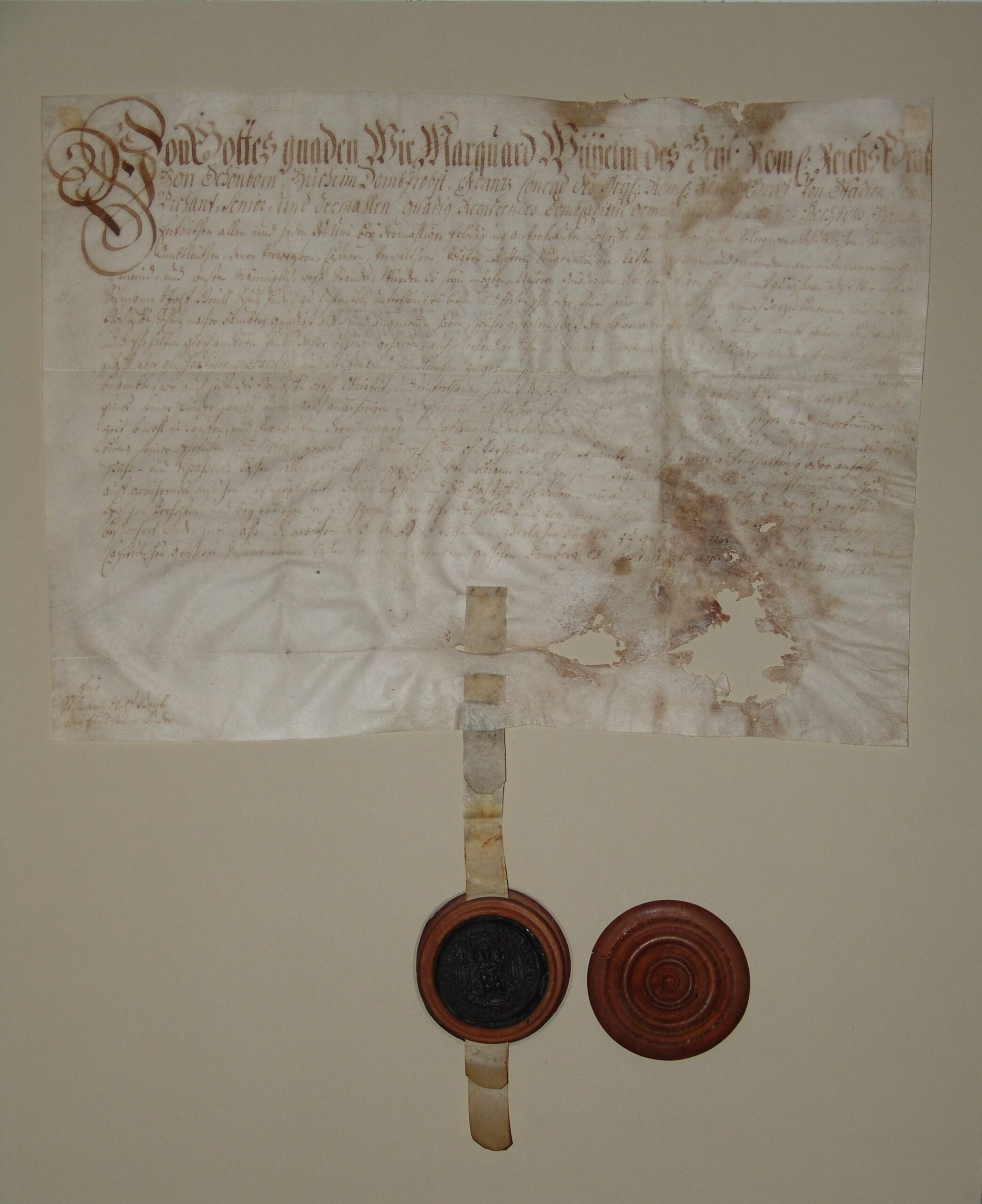 The original Brüll Schutzbrief from 1746 was donated by Daphne Doctor to the Sydney Jewish Museum. Images and archival details here.

Here are two translations supplied by the Sydney Jewish Museum:

We, by the grace of God, Marquard Wilhelm, Count of the Holy Empire, Provost of the Cathedral; Franz Konrad the Holy Roman Empire’s Count of Stadion, Dean of the Dom, senior and now reigning chapter of the Cathedral bid our most gracious greetings to everyone and all who are by the erstwhile mandate, given in charge of the Chapter, pertaining to the grand Chapter of the Capital of Bamberg administrators, councillors, courts of Justice, communities and also subjects altogether whatever rank and dignity they might be and add to notify them herewith that we, upon the humble begging and imploring of the S.W.B., a Jew living under the protection of the authorities, him and one of his children, that he will get thereto an addition, have received and accepted under the protection of the Grand chapter of Bamberg, so that he himself and one of his children, with all his family and wives, like other Jews here, modestly be maintained, also have the power to exercise some honest, sincere, just, and lawful, but harmless to our citizens of Bamberg, bargains and business. Herewith it is the most gracious order of the chapter’s authorities to all above mentioned superior and inferior officials, as also to the subjects that they shall let pass and repass this S.W.B. as any one of his children, his family and his wives, by land and by water. Exempt from duty the secure and unmolested at any time, both in buying and selling of their merchandise, after having paid duty he owes therefore. And additional duty and the like. As exercised at his honest commerce profession and business, and grievances undisturbed and unharmed without delay or bother as not less to help him and his children, to the payment of debts due and confessed and justified to him, upon befitting request, as possibly and justly and he might not be bothered by passing soldiers, or by other persons and might be granted the adequate help of the officials. That we admit be taken into effect, and prove it by documentary evidence.
We the Provost of the Chapter, 1746
Translated by Dan Barlev

By the grace of God, I, Marquard, Wilhelm, of the Holy Roman Empire, Count of Schonbrunn, Cathedral…of Bucheim and with it, mercifully him, Frantz Conrad, of the Holy Roman Empire, count of stadion, cathedral deacon, senior, and before mercifully ruling together the Imperial bishopric…Bamberg order all and each, in this matter involved in the bishopric Bamberg, entrusted to us, officials, mayors, their assistants, officers, civil servants, administrators, judges, councillors, parishes and our subjects, together and individually and whichever station they may be, we extend our loyal greetings and hereby wish to advise them that, at the loyal entreaties and submissive entreaty of Susmann Wolf Brull, protected Jew at Lichtenfels, we have accepted him or one of his children that he is going to nominate, and received him into the protection of the Bishopric of Bamberg gracefully, in such a way that he or one of his children or one of his children with the members of his household and wives in the same way as other Jews here be kept in an unassuming way, be given permission to engage in several honest, upright, lawful and admissable trade, mercantile and business without doing harm ot our citizens of Bamberg herewith order the mentioned higher and lower officials as well as all bishopric’s administrations and subjects gracefully that they let the said Syussmann Wolf Brull or one of his children with memebers of his household and their wives on water or land for their person without having to pay duty, safely and unmolested, at all times, in respect of buying and selling of their merchandise, after offsetting and paying the duties owing, the charges and the like, in the carrying out of his honest commerce, trade and enterprises, without hindrance, molestation, without any unnecessary delays or contestation let him pass and return, help him or the said child to his claimable, established and lawful debts, after recognised request according to possibility, reasonableness and subject to the ordinances of the Bishopric ad the Holy Roman Empire, and also in the case of transit so that he and the said child be unlawfully hindered by their soldiers or someone else and give him in every case the required official assistance.
We rely on the carrying out of this and in documentation we affixed our cathedral capital’s Greater Seal hanging from here, given and confirmed.
Bamberg ex Capitale Interregni, 22 September 1746

This work and all images and artefacts in the Writing of Memory project are licensed under a Creative Commons Attribution-NonCommercial-ShareAlike 4.0 International License